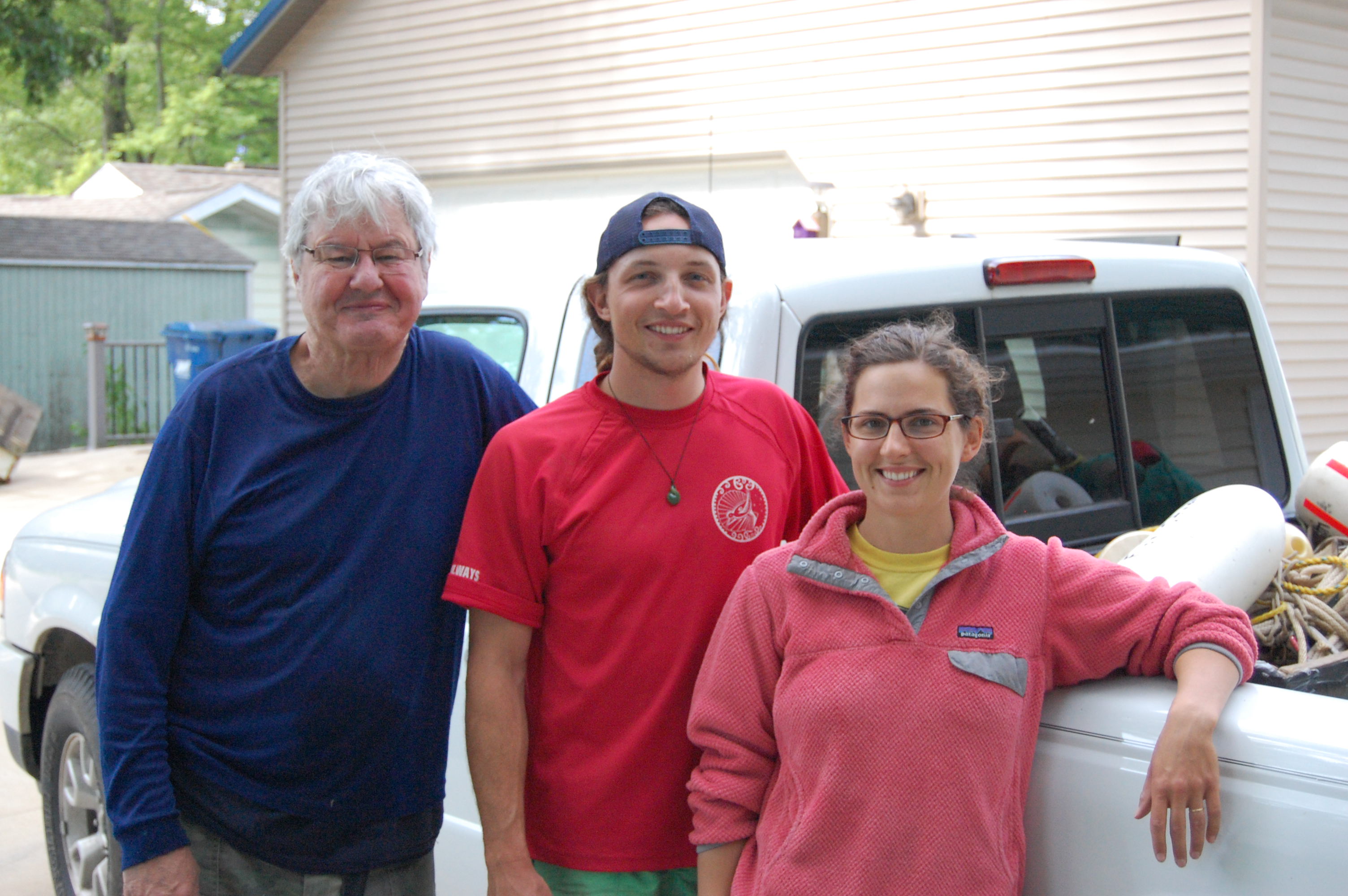 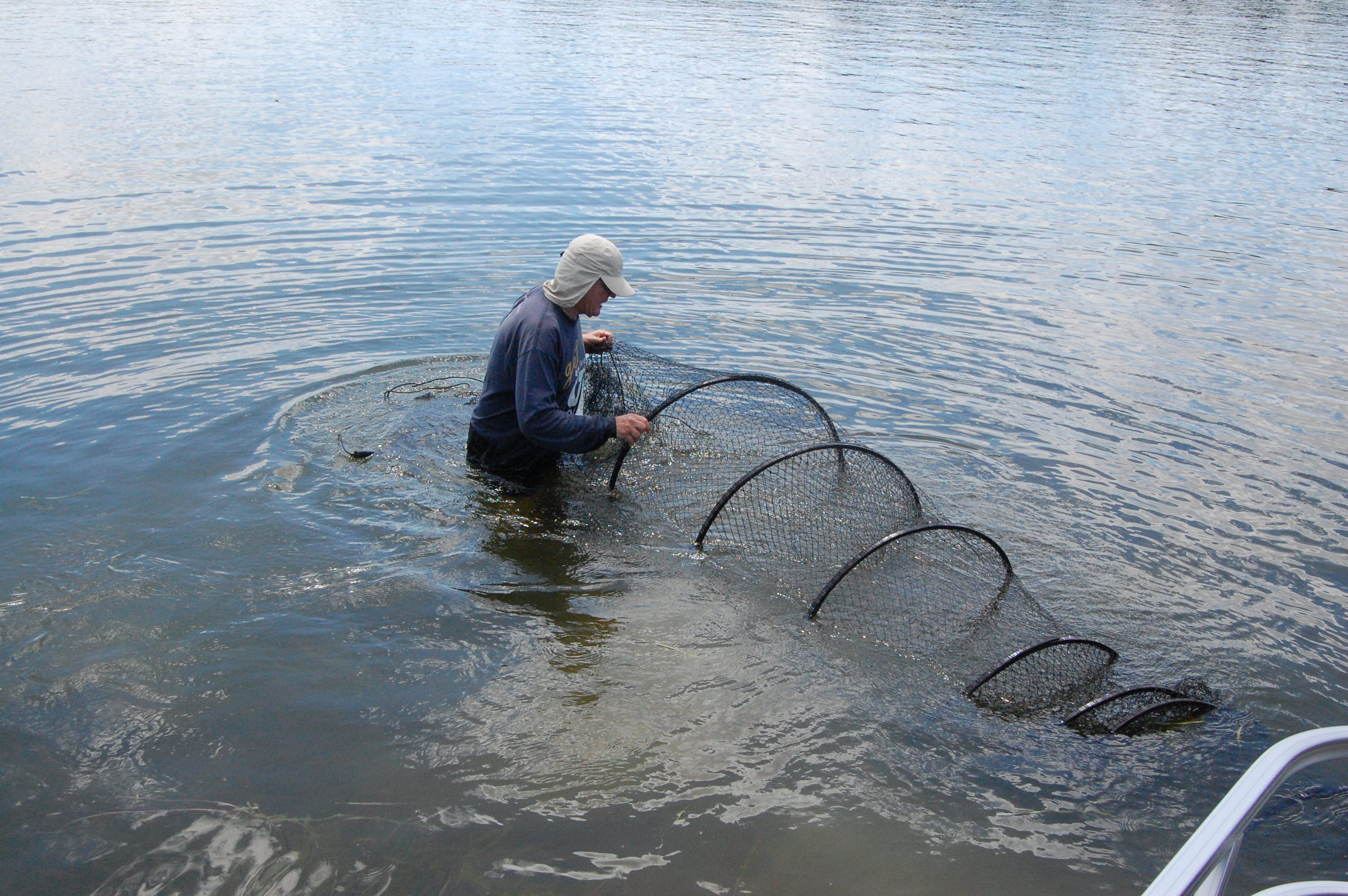 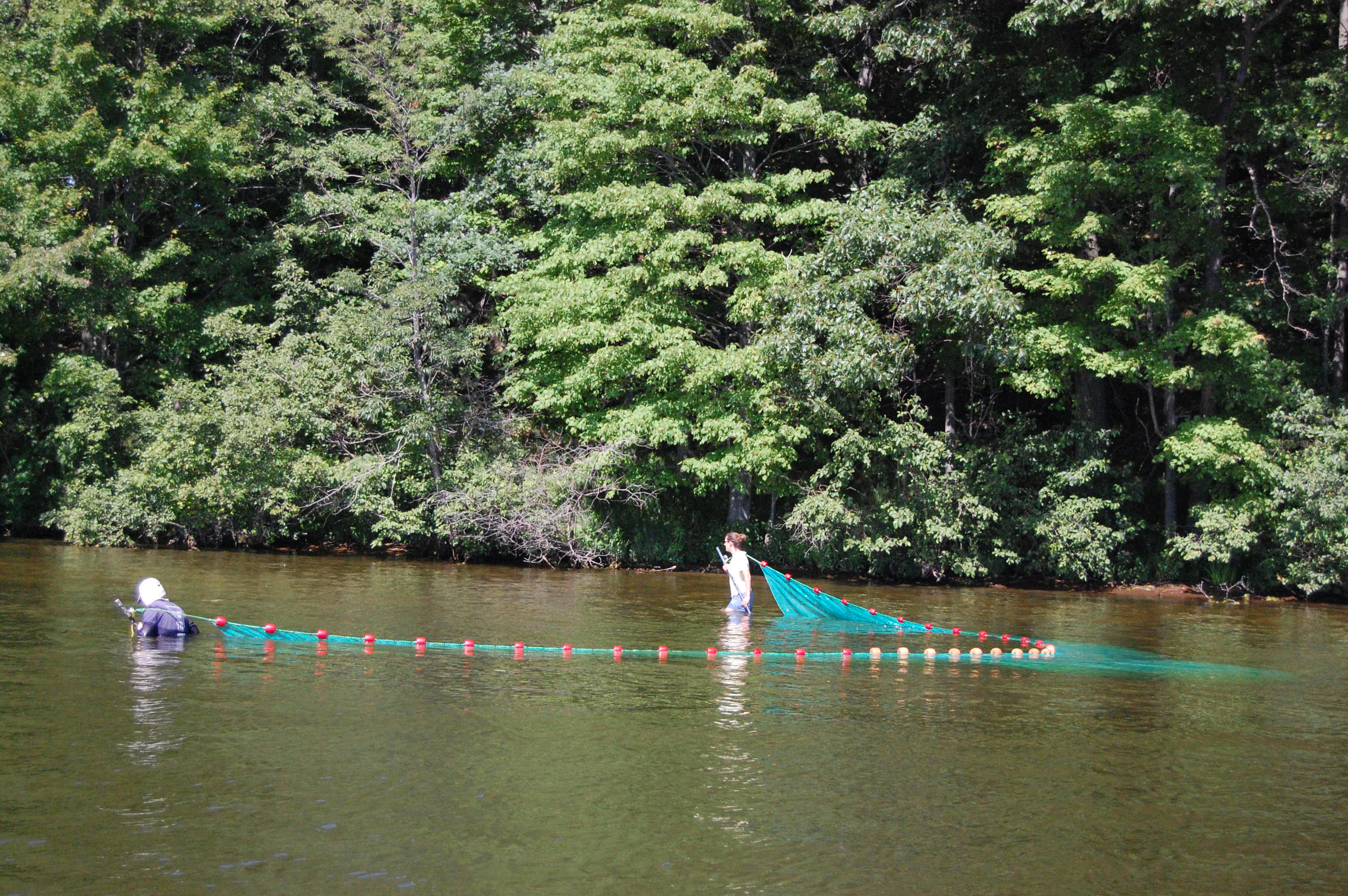 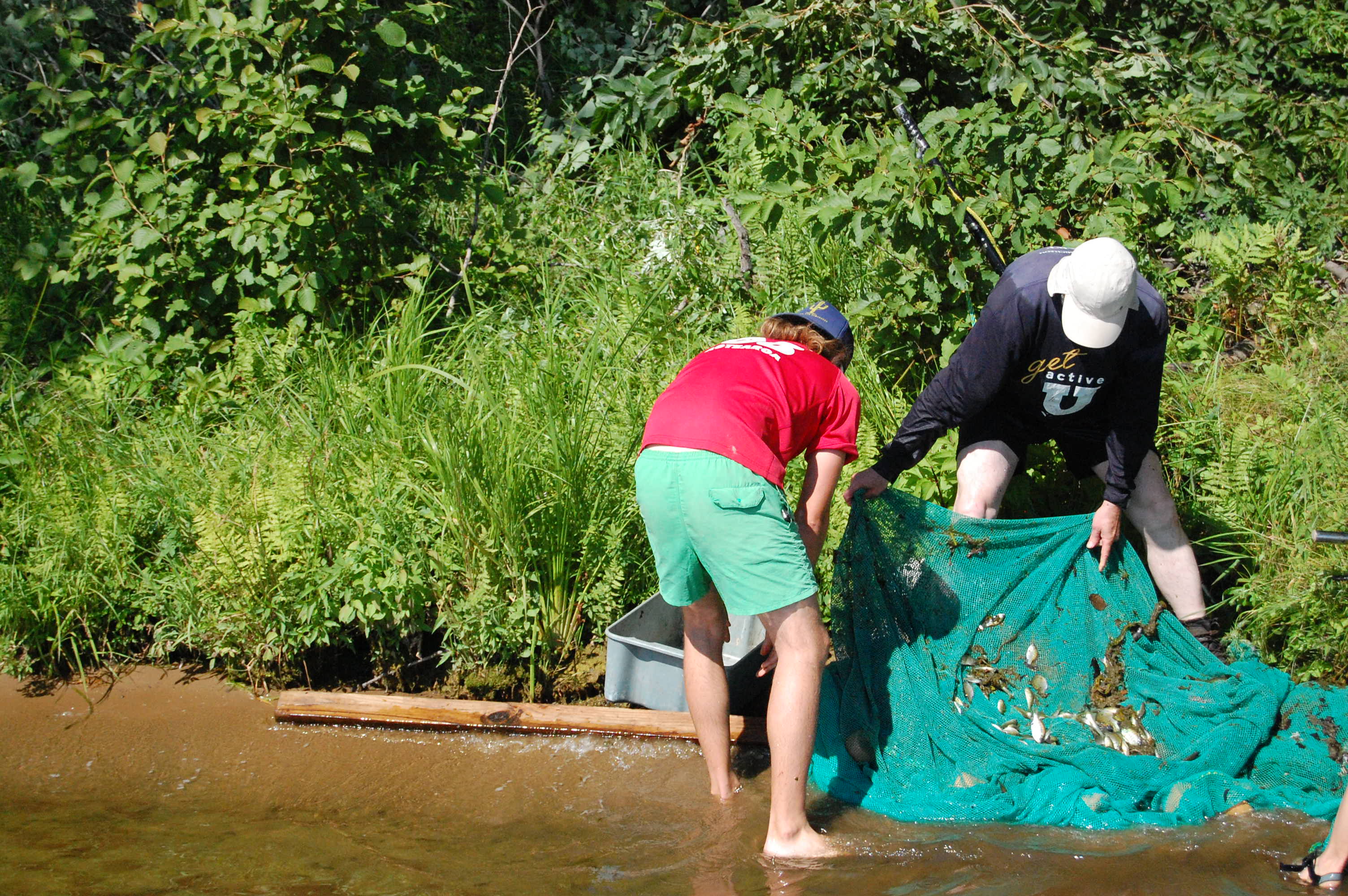 Pulling in the Seine Net 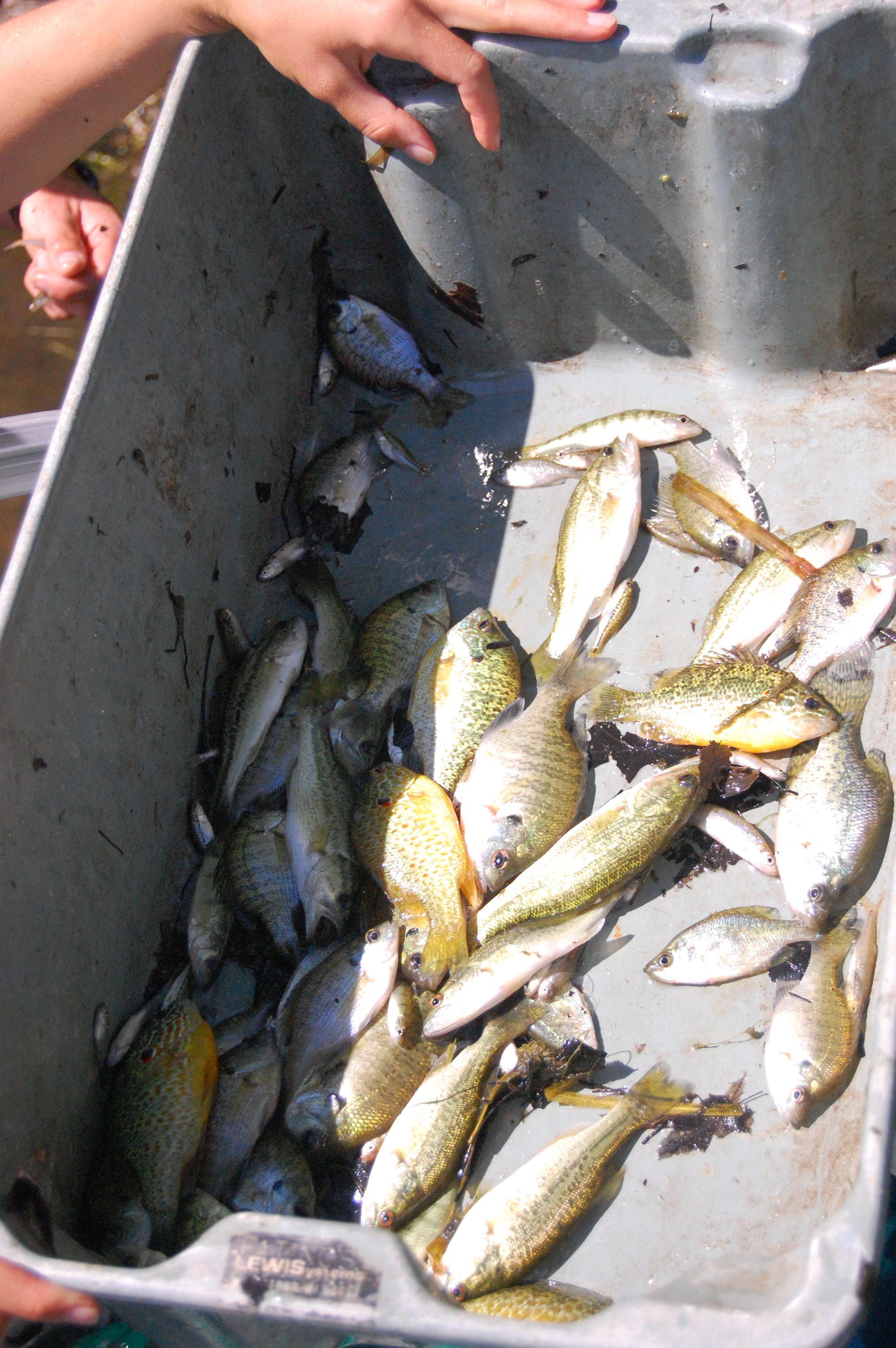 Panfish and minnows captured in the seine net drag 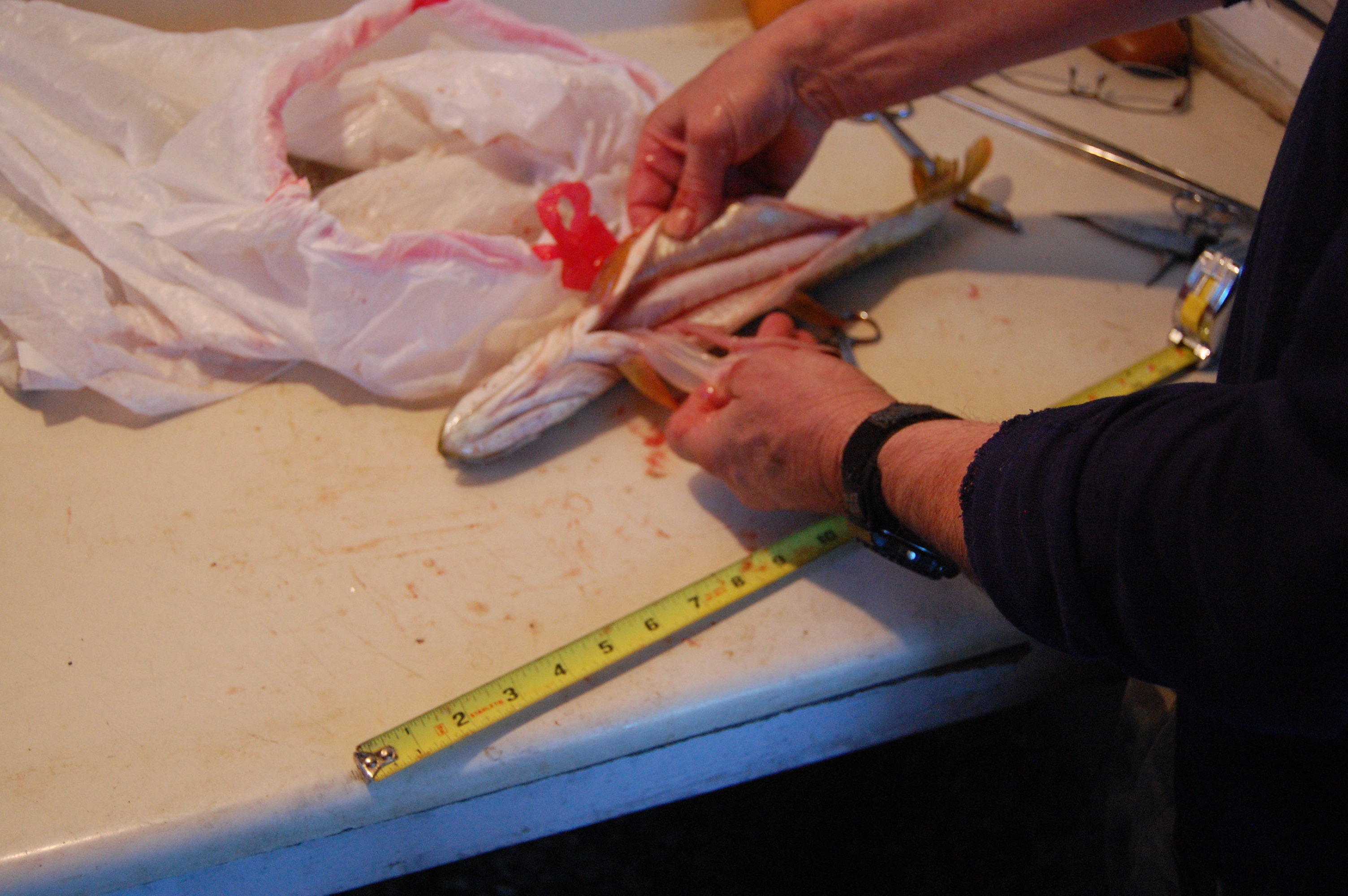 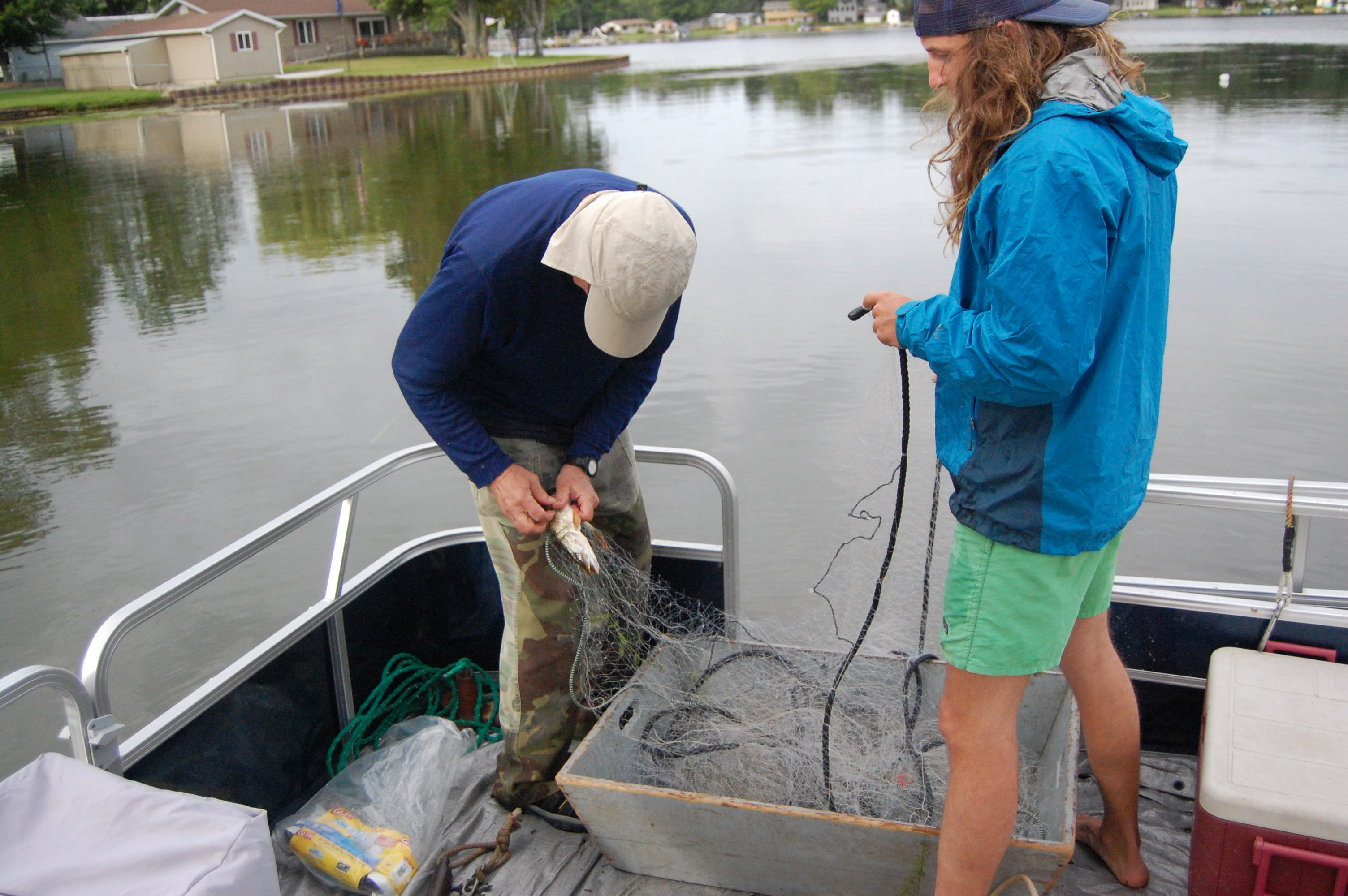 On July 24 and 25 I accompanied the research team hired by your Lake Association to study the fish population.  David Jude (University of Michigan Research Scientist Emeritus) along with assistants Kim Greene and James Hart brought a truck full of gear to do their work on the lake.  We unloaded the truck and reloaded our pontoon boat then took a quick tour of the lake searching for sites to place several capture nets.

Our first stop was the deep hole  (85’) in front of Camp Echo’s swim area.  David measured oxygen levels, water clarity and temperature .  Surprisingly, the oxygen was depleted just 14 feet below the surface in the hole.  This means anything under that 14 feet is a “dead” zone where nothing can survive. This is not uncommon during the summer months as the water “turns” over several times and is similar to when we have “ice out” conditions.  The bottom temperature was 41 degrees with visibility between 8-10 feet.

We then chose several sites for the setting of the gill nets.  Weed edges bordered by deeper water are favored. The nets were comprised of 3 sections each with a different size capture mesh.  We would check these nets after several hours.

The team was looking for a sandy shoreline bordering some deep water for using a seine net so we motored to the north end and the creek inlet area.  Seine netting involves two team members pulling a 50 foot fine mesh capture net through about a hundred foot stretch of shoreline water.  It means getting wet and slogging through the shallows while pulling the heavy net and slowly circling back to shore with the catch.  This method proved the most successful not only along the north shore but in several other areas as well.  Numerous sunfish, bluegill, perch, minnows, bass and a few crappie were collected and transferred to storage crates for later identification, measurements and scale samples.  One area produced 8 of the nicest bluegills I have seen in a while.  All were “eaters’’ at least 8 inches long with one topping 9 inches and as big around as a saucer plate!  Several still had worn down tail fins indicating they were on spawning beds earlier this summer.

The last method of capture used hoop nets.  Think of a V with a net at its base.  Fish swim along the walls of the V and enter the net but cannot escape.  We were able to bring in several larger bass and pike along with a few more panfish.  These fish were documented and had scales removed for growth and age then released to swim again.  This method was the least effective of the three used by the team because it is tough trying to position the nets in areas of high fish activity or travel.

We had a light dinner and then went back out to check the gill nets. As expected, these were host to many undersized pike, a few bass under 14 inches and also many small perch.  Most fish had died (as the net is designed to kill) and made their way into the collection bins for later study.  Living fish were recorded and released.  Although some good samples were taken, it was decided to re set the nets for an overnight capture.

The crew returned to our cottage wet, chilly and tired but quickly caught a second wind and wanted to do some recreational fishing off our dock.  Surface poppers were chugged for about a half hour with Ms. Greene landing a beautiful 18 inch largemouth!  It was a fitting close to a long afternoon and evening.

We were up early and after some pancakes and sausage, eager to check the overnight gill nets!  The first set revealed a bonanza of finned specimens!  Several large “slab” crappies were landed as well as numerous pike, bass and assorted panfish.  Once again, small 3-6 inch perch were the dominate species collected.  The second set also produced many of the same species and included one yellow and one brown bullhead.  Several of the trapped fish had become turtle chow, something most of us can attest to by the numerous numbers of snappers, painted and soft shell turtles often seen.  It was apparent that the team was very pleased with the results from this overnight set and had an ample supply of fish for study.

Equipment was collected and loaded back onto the truck by 11:00.  Handshakes and goodbyes all around and then the team was back on the road to the East side of the state.

In summary, I found the crew led by Professor Jude to be highly knowledgeable , efficient and very  personable during the time spent on the lake.  Jude is reserving comment until all the results are studied but was surprised at the number of small pike caught (not a single pike over 22” was netted) and the number of bait fish (perch and minnows) that made up the bulk of the catch.

When asked by this fisherman about smallmouth bass and walleyes being caught, he stated that based upon preliminary observations, smallmouth bass and walleyes are not well suited to the lake environs and are probably being introduced by well meaning but misguided  locals.  This practice, if true, could result in disease or invasive species taking over our pristine waters.

The entire experience was very enlightening to observe and I’m glad I was able to assist in a small way.  Results and recommendations of Professor Jude’s study will be presented to the board later this year.